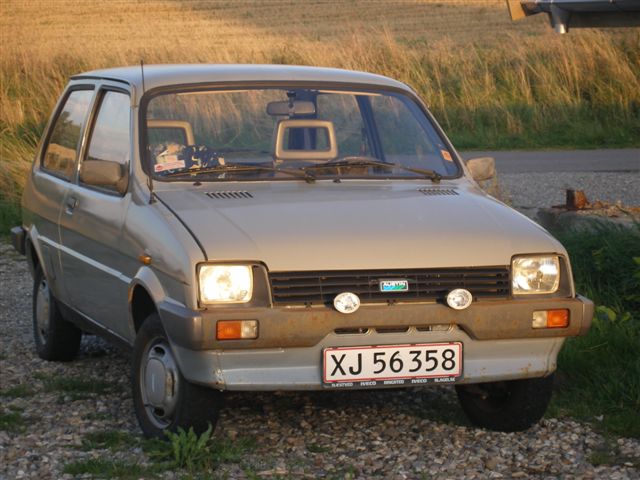 The Metro is a supermini car that was produced by the Austin Rover Group division of British Leyland and its successors. It was launched in 1980 as the Austin mini Metro. It was intended to complement the Mini, and was developed under the codename LC8.
During its 18-year lifespan, the Metro wore many names: Austin Metro, MG Metro and Rover Metro. It was re-badged as the Rover 100 series in 1994. There were also van versions known as the Morris Metro and later, Metrovan.
At the time of its launch, the Metro was sold as an Austin. From 1982, MG versions became available. From 1990 until its demise in 1994, the Metro was sold only as a Rover.
Although the new Rover 200 (introduced in 1995 and smaller than previous 200 models) had originally been designed as a replacement for the Metro, it was not marketed as such after its launch[3]. A direct replacement in the supermini class did not arrive until 2004 with the CityRover. The Rover 100 was finally cancelled in 1998, ironically being out-lived (by two years) by the original Mini it was meant to replace.
Austin/MG Metro
On 8 October 1980, BL introduced the Austin mini Metro. It was intended as a big brother, rather than as a replacement, for the Mini, the earlier Mini replacement project, ADO88, having been replaced in late 1977 by a new project, LC8, for the development of a larger car which could compete more effectively with the successful superminis, such as the Ford Fiesta.[4] Some of the Mini's underpinnings were carried over into the Metro, namely the 999 cc and 1275 cc A-Series engines, much of the front-wheel drivetrain and four-speed manual gearbox, and suspension subframes. The Metro used the Hydragas suspension system found on the Allegro but without front to rear interconnection. The hatchback body shell was one of the most spacious of its time and this was a significant factor in its popularity. Initially, the Metro was sold as a three-door hatchback.
The name was chosen through a ballot of BL employees. They were offered a choice of three names, Match, Maestro or Metro. Once the result was announced, the manufacturer of trains and buses, Metro Cammell, objected to the use of the Metro name by BL. The issue was resolved by BL promising to advertise the car only as the miniMetro.
At the time of its launch, the Metro was hailed as British Leyland's saviour, as the company was facing a serious financial crisis and there were fears that it could go out of business. British Leyland's troubles were largely attributed to out-of-date technology and design of most of its model range. The Mini, for example, had been in production for 21 years by the time of the Metro's launch. The Austin Allegro was seven years old and the Morris Ital was also launched in 1980 but was effectively a reworked version of the nine-year-old Morris Marina, and BL's latest all-new car was the 1976 Rover SD1.

One of the consequences was that there was enormous public interest in the car from well before its launch. The company chose to stage the launch presentations for dealers and major company car buyers on board a cruise ship, the MS Vistafjord. The news broke in the national newspapers a full year ahead of the public launch with The Sun, among others, carrying the story. It was finally revealed to the public on the press day of the British Motor Show with the British Prime Minister, Margaret Thatcher in attendance.
The Metro quickly proved popular with buyers, and during the early part of its production life it was the best selling mini-car in the UK, before being eclipsed by the updated Ford Fiesta. Its clever interior design made it spacious considering its dimensions, and Hydragas compensation gave surprisingly good ride and handling. Its updated A+ series 1.0 and 1.3L OHV engines hardly represented the cutting edge in performance, but they were strong on economy.
A major TV advertising campaign was created by the London agency, Leo Burnett which came up with the headline "a British car to beat the world". The advert also featured the similar-sized Fiat 127, Renault 5, Volkswagen Polo and Datsun Cherry as "foreign invaders" and the voiceover spoke of the Metro's ability to "send the foreigners back where they belong".

5-door hatchback
At the end of 1987, the Austin marque was shelved. The Austin badge was removed from the cars, which continued to be manufactured with no marque badge, just a model name badge. Rover management never allowed Rover badges on the Montego or the Maestro in their home market, although they were sometimes referred to as "Rovers" in the press and elsewhere. They wore badges that were the same shape as the Rover longship badge, but which did not say "Rover". The Metro did too until May 1990, when it was officially relaunched as the Rover Metro, heavily revised and fitted with a new range of engines.
The ageing 998 cc and 1275 cc A-Series engines - which had been in use since the late 1950s - gave way to the K-Series 8 valve engines and a 16 valve engine in the GTi (early variants were 95 bhp (71 kW) Spi & later Mpi version 103 bhp) and the early GTa. All models used bought in end-on Peugeot gearboxes. In 1993, a 1.4 PSA TUD diesel from the Citroen AX / Peugeot 106 was launched. The Hydragas suspension was finally modified to accept front to rear interconnection in the way that Alex Moulton so desperately wanted to bring the car back up to standard in terms of handling and ride quality.

The resulting car was shown to the world in May 1985. It was powered by a David Wood designed bespoke 3-litre V6 powerplant which used some of the engine architecture of the Cosworth DFV. It featured twin overhead camshafts and four valves per cylinder. The engine was a break from the norm, as it wasn't turbocharged as the majority of its competitors were. The engine was mounted back to front in the car, with the forward end of the engine facing the hatchback and the gearbox attached conventionally behind it and, therefore, in the middle of the vehicle. The four-wheel-drive was permanently engaged, and drove separate propshafts to the front and rear differentials. The rear differential was mounted on the side of the engine sump with one driveshaft running through the sump to the nearside rear wheel. Much of the outer bodywork was made of GRP, with the only exception being the roof panels (which were aluminium) and the steel doors. These were, however, concealed by plastic airboxes. Indeed, models now on show generally have stickers demonstrating where it is safe to push from when moving the vehicle, so as not to damage the bodywork.
The 6R4 appeared in two guises. There was a so-called Clubman model which was the road going version which developed in the region of 250 bhp (186 kW), of which around 200 were made and sold to the public for £40,000 (the homologation version). A further 20 were taken and built to International specifications which had a recorded output of over 410 bhp (306 kW; 416 PS)

Popularity
The Metro remained one of Britain's most popular cars throughout its production life, even during its final year when it was among the oldest designs on sale in the country. During its early years the Austin Metro was Britain's most popular supermini, often outselling the Ford Fiesta. 1,370,000 Austin examples were sold in the first decade of production[citation needed], over 100,000 a year.
This popularity endured in spite of the Metro failing to match the durability of key rivals, notably the Nissan Micra and Volkswagen Polo. This is illustrated well by the findings of Auto Express's 2006 survey[citation needed] which named the Metro as Britain's seventh most scrapped car. Just 21,468 were still in working order at the time of the survey, approximately 1.5% of all those registered.
Many Metros (particularly the pre-1990 Austin models) have been scrapped as a result of rust and corrosion. An equally large number of Metros were scrapped as a result of theft: Early Metros were notoriously easy to steal. Later Rover badged models however had better anti-theft equipment (including an engine immobiliser) which addressed this weakness.
Lady Diana Spencer (later Princess Diana) owned a red W-registered Metro before her engagement to Prince Charles.[5] This car is in the Museum of British Road Transport, Coventry.
The Metro was used in several British sitcoms, including a white 5 door owned by henpecked neighbour Elizabeth in Keeping up Appearances, a brown 3 door given to Audrey Forbes-Hamilton by Richard Devere in To the Manor Born, and Geraldine Granger's mention of owning one in The Vicar of Dibley. Metro police cars are used in the 1986 film Clockwise, a beige Metro five-door is one of the getaway cars used by the jewel heist gang in the 1988 film A fish called Wanda, and a Metro also appears in a 1988 feature length episode of Only Fools and Horses.

The most talked about car of 1980 made its public debut amongst much media attention, the Austin Metro. Billed as the replacement for the ageing Mini which, despite first being seen in 1959 outlived both the Metro and earlier "replacement", the Clubman.
The Metro featured a smart, modern, three door hatchback body with revolutionary "split-folding rear seats" now a common feature. Mechanically the Metro made do with the front wheel drive A-series engine (now in A-plus format) and Hydragas suspension.
There were many variants of the Metro, including commercial, Vanden Plas and MG versions. The Metro moved with the changing faces of BL/Austin-Rover and later BMW owned Rover. Three and five door Metros were built and an improved family of engines were fitted in later Metro and "Rover 100" models. 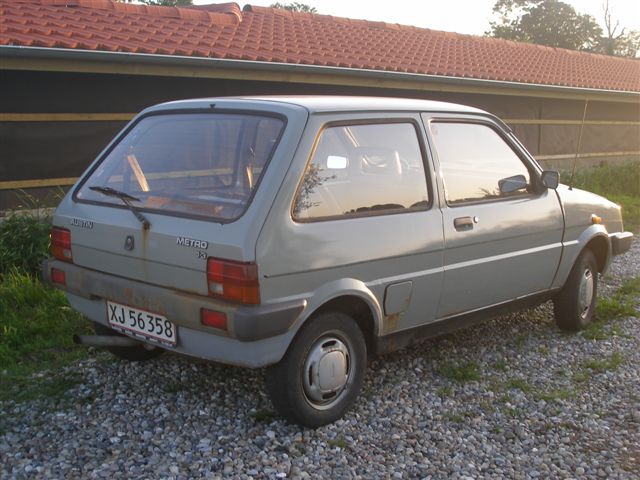